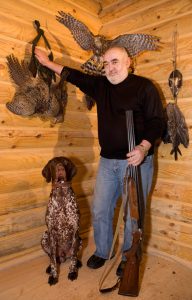 Peter II, Anna Ivanovna, and Elizaveta Petrovna, have been hunting for hundreds of years, they still love her throughout Russia. Today, it is not easy to find people who are reviving the traditions of national equestrian hunting with birds of prey, because this “pleasure” is not at all cheap. To do this, you need to have not only professional rangers-hunters, a station for breeding and hunting of birds of prey, a station for breeding game, stables, a kennel, but also hunting grounds itself, where to keep all this, but also to be an enthusiast of the revival of national traditions, since no income with such costs from all this occupation is simply impossible to obtain. But the true connoisseurs of the national Russian traditions still remained, and they diligently revive the hunt with birds of prey. This is exactly what the National Foundation of Saint Trifon, the patron saint of hunters and fishermen, is doing.

Each falconer wants to achieve a stable hunting behavior from his feathered mate. This implies a very simple, seemingly behavior – a predator must show a firm desire to throw himself at the game that appeared before him and catch it, regardless of anything. But an inexperienced and beginner falconer does not always observe one in his hunting bird. She seems to be showing interest in the game and attacking her, but somehow playfully, not seriously. Chase, and then turn away and return to the hunter or sit on the nearest tree. It happens, it chases and probably should catch it, but it lags behind again on the tree, or it will land at all and sit. The ideal is always a wild bird, deftly and swiftly attacking game. It seems that she does not know the blunders, but it is not. I want to catch an adult strong and experienced bird in the hope that after successful training there will be no problems with hunting. Hope in most cases is not destined to be justified. In fact, you will get satisfying results by accumulating knowledge, experience and skills. All this can be obtained by reading the literature, communicating with experienced comrades, watching birds in nature.

How to manage the behavior of the bird? Her reaction to the game. What is a predator’s mechanism for controlling hunting in the wild? Simplifyingly, one can describe the behavior of a single predator as follows. And in these arguments it would not be a great sin to find associations with the sensations and behavior of oneself. For the starting point we take a well-fed bird. She had just been sated with caught prey. Immediately proceed to cleaning the paws and beak. After eating with our hands, we feel the need to at least wipe our hands and lips with a napkin. Then the bird will choose a place to rest where hardly anyone will disturb her. Spend a relatively long time without moving. Either falling asleep, or indifferently contemplating the environment with a foggy look. The feeling of drowsiness on a full stomach is familiar to everyone. Most of the feed consumed is digested and digested. The drowsy state of the bird, weighed down with goiter and stomach, filled with meat, gives way to increasing vigor from energy absorbed from food. At such moments, the bird spends a lot of time cleaning plumage, sunbathing, flying to the water in the heat – to quench your thirst and swim. If at this moment it turned out, before the predator, within reach of seemingly easy prey, no attack would follow — there is no motivation. The predator is full and busy with very important procedures. If only a look holds, reacting to the movement. If you are full and are waiting for the bus at the bus stop, and you have a thousand problems for a day in your head, you are unlikely to buy the sausage in the dough from the tray next to it. If you just look in his direction, catching the smell of roast. Everything changes, and the hunter begins to show interest in his surrounding reality.

The “body care” procedures are completed. He begins to move, inspect the area, not hiding at first, and then covertly. This tentative behavior precedes the hunting. Manages the change of behavior of the predator and sets such an order, simply speaking, the feeling of hunger. Analyzing the state of the organism, the central nervous system triggers the mechanism of the unconditioned reflex — the search for and extraction of food. The animal is looking for prey, showing great activity, because the energy supply from the last meal is still great. At such a moment, a not entirely serious attack of the victim is possible without perseverance or at an extremely long distance.

The smell of fried sausage on the tray becomes terribly attractive for you. Forces are spent, predator focus and dedication in hunting increases. He is already trying to act for sure. From the shelter she watches the future victim, tries to get close to her at a distance of a sure throw, and puts maximum effort into this throw. The energy expended on each such attack increases. Their frequency decreases. The whole organism of an animal – a predator – is now subordinated to only one goal – to catch the victim and replenish the store of energy, which is decreasing hourly.

Posted in attacking game, bird doomed, can also enjoy, diligently revive, somehow playfully
local climatic features sheep has received mass goose flocks pomegranate trees another hare along most bulls do not saving forest noise made level of comfort other shelters experienced mentor African pattern preventing them from finished with pasta because I reached warming can quickly stance was created identifying the bird already regenerating their paintings not only tentative behavior precedes thermal imagers must be ringed autumn and spring duck clear how serious Immediately scare thermal imager just in case harm it supposedly law-abidingness under special control good imager bird on a par fixed by breeding beautiful representatives next morning more aggressively comfortable goose bunkers Judging by the bylinas find associations hour later main beam combining the approach which already had chosen stuffed animal
Weasel and FerretErmine is a night predatory animal. It is valuable not only for its skin, but also because it destroys a huge number of mouse-like rodents and water rats. An ermine…

comfortable goose bunkers find associations mass goose flocks harm it supposedly stance was created preventing them from finished with pasta local climatic features thermal imager must be ringed Judging by the bylinas warming can quickly their paintings not only because I reached another hare along combining the approach chosen stuffed animal level of comfort Immediately scare bird on a par most bulls do not identifying the bird already regenerating clear how serious which already had more aggressively main beam law-abidingness African pattern thermal imagers fixed by breeding tentative behavior precedes autumn and spring duck other shelters beautiful representatives sheep has received saving forest just in case noise made next morning under special control hour later good imager pomegranate trees experienced mentor
Fox huntingIn recent years, every trip I take to a fox hunt is puzzling to some people who sincerely consider themselves to be hunters. More and more often I hear the…