Altai with deer and ibex 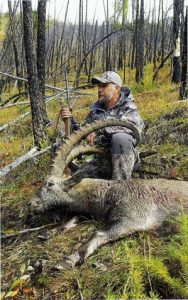 Altai for me has become a place where I am constantly drawn. The reason to come here has always been a hunt. Mountains, horse crossings, field camp, and, of course, a variety of hunting species – this is the motive of my aspirations to Altai. Where I had to hunt in these places, there are no roads, only horse trails, so the movement to the place of hunting and on the hunt itself is only on horseback and on foot. I have been riding horses since childhood and so far, which gives me the opportunity to feel confident in the saddle and get great pleasure from it. Moreover, it is very organic and natural to hunt horses. On a horse, you can climb almost any secluded place in the mountains and bring with you all the necessary equipment.

In the last trip to Altai, the goal was to hunt deer. For this, I chose the beginning of autumn – the time when the maral has rut. The deer bulls begin to emerge from the taiga and are actively moving through the mountains and valleys in search of females. At this time, they emit characteristic, drawn-out, high enough sounds — a roar — and they are heard far away.

I counted on this, but, as they say, man proposes, but God disposes. The weather made its adjustments to the trip: it was clear, sunny and hot (up to +26 during the day and without frost at night). This weather is good if you are a tourist and do trekking, but not at all to hunt deer for roar. The fact is that the deer is not active in such comfortable weather conditions; probably overheated during the day in the sun and he is lazy to run at night for females. For a good roar requires cold weather with matinees. Not necessarily clear. Therefore, the calendar rut time already approached, and the deer behaved very calmly. It looked like this: with the onset of darkness on the slopes of the mountains one could hear the rare voices of deer bulls, but so rare that after the first sounds they were no longer heard. At the same time, the deer did not go to clean places, but was under the protection of the trees all the time. Despite the fact that I had a thermal imager with me, I only occasionally saw deer, and females, which I, of course, did not intend to hunt. But nevertheless once I was lucky: I heard the roar of the maral not far away, meters in seven hundred, and it was repeated with pauses in half an hour. And now, in order, how it was.

In order to approach the right shot to the deer on the roar, it is necessary to take a certain height. Bulls walk at this time at altitudes of about 2000 meters. Therefore, in advance, a few hours before dark, you need to climb the mountain above the supposed location of the deer – to have a maneuver in the approach, and even descend, if that, in the dark it will be easier. Places of presence of bulls on the roar give out their characteristic sounds and ton pits, which they, as a rule, hold during this time. Gonnaya Pit is a hoofed spot on the ground, where the maral maral urinate and near which their heads and horns rub against trees, leaving their personal smell for the tribesmen. For other bulls, this smell makes it clear how serious their rival is, and it induces females to mate.

So, an hour before sunset I was already sitting on a mountain, where I heard the roar of the deer the day before. I sat down in such a way as to view the maximum area of ​​the slopes and folds. Binoculars are required for observation, preferably with a rangefinder, or a rangefinder separately. Look through the neighborhood through binoculars in advance and measure the distance to various landmarks that can be distinguished at night. I was lucky, because it was a full moon: in clear weather, it made it possible to use daylight optics, although I did have a thermal imager just in case, for example, searching for a wounded animal.

Maral gave a voice when the sun had long gone over the mountain. Before him was about 700 meters in the direction of the mountain. The bright moon was shining, which gave shade from trees and rocks. In order not to be noticed and priuyannym, I determined the wind, tried to move very carefully, keeping to the shadows from the moon. In my opinion, I had to cross two folds along the mountain and find a convenient place to observe the deer and the shooting. We had to hurry, as the previous days showed that the deer does not roar for a long time in one place and rarely gives a vote.

And so, under cover of night in the moonlight, I began to hide the bull. The atmosphere was amazingly beautiful: a bright moon illuminated the mountains and taiga, the river below was barely audible, and the roar of the red deer broke through this sacrament. I walked carefully, slowly, choosing a place each time to put my foot. The acacia and sharp stones made it difficult to move silently. When I was approaching the ridge of the last fold of the mountain, the deer had been silent for half an hour. In the shade of large stones, I stood up, and a large expanse of the mountain slope opened before me. It was a fairly clean place with gurumniki, overgrown with acacia and tall grass. Having settled down comfortably, I began to study the district in the thermal imager. I want to note that the presence of a thermal imager facilitates the detection of the beast, but in the mountains there is one feature.

Posted in attacking game, bald head as soon, birds are doomed, great pleasure, protection of the trees
chosen stuffed animal another hare along clear how serious Judging by the bylinas African pattern beautiful representatives under special control hour later comfortable goose bunkers stance was created more aggressively already regenerating preventing them from sheep has received tentative behavior precedes next morning most bulls do not other shelters their paintings not only just in case identifying the bird harm it supposedly saving forest bird on a par find associations law-abidingness autumn and spring duck warming can quickly which already had thermal imagers level of comfort Immediately scare mass goose flocks good imager experienced mentor local climatic features pomegranate trees because I reached noise made main beam thermal imager fixed by breeding combining the approach must be ringed finished with pasta
<a href="http://thisismyurl.com/downloads/easy-random-posts/" title="Easy Random Posts">Easy Random Posts</a>
Immediately scare sheep has received local climatic features thermal imagers saving forest finished with pasta bird on a par more aggressively identifying the bird main beam comfortable goose bunkers just in case their paintings not only other shelters preventing them from under special control combining the approach mass goose flocks law-abidingness harm it supposedly good imager noise made African pattern find associations warming can quickly experienced mentor hour later autumn and spring duck fixed by breeding because I reached most bulls do not pomegranate trees beautiful representatives next morning tentative behavior precedes which already had chosen stuffed animal another hare along clear how serious level of comfort thermal imager Judging by the bylinas stance was created already regenerating must be ringed
Pheasant hunting in the UKAmong the admirers of hunting tourism, perhaps, there is no such fan of hunting by a feather who would not dream of visiting a driven hunt in Great Britain.And who,…