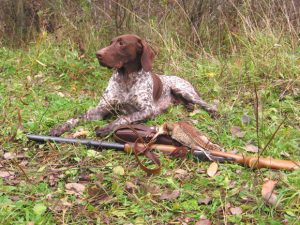 The main purpose of dogs is hunting game birds, which are hidden in the thickets of marsh vegetation and along the banks of reservoirs. In this case, the dog indicates the location of the bird found resistant, i.e. characteristic suspension in a tense posture. Despite the well-known stereotype in the actions of a dog, a hunter and a game, this beautiful, fascinating hunt never seems monotonous.

Before entering the field, at about one-year-old, the dog must be imparted with general obedience skills, of which training should especially impeccable obedience to a prolonged whistle as a draft team, and perform the technique of “lying” near the trainer and at a distance on command with a voice and a show of hands.

A field dog’s nataska is usually divided into three main stages: mastering the search, familiarizing with the bird, and training for shooting a bird. Today we will talk about the first two stages.
Mastering the search game game dog
By a correctly posed search for a dog you need to understand its course when searching for a bird, in which the dog most exhaustively searches the field provided to her, working from leading to the wind to the right and left, within sight and audibility of commands, doing all this independently.
With this search system, the dog moves like a shuttle, and the lines of its movement in both directions will be almost parallel, whence they are called parallels. The distance between the parallels should correspond to the range of the dog’s intuition.

The movement of the dog by the right “shuttle” is possible only against the wind, and therefore even well-trained dogs, started up with the wind, search the field haphazardly.

It is better to start working on the search before the dog meets a bird in a swamp where it is impossible to meet game. After several lessons, when the dog is more or less assimilated by the demands made on it, the work on the search is transferred to the swamp, where the dog will meet with the bird.

To assimilate the movement of the dog on the parallels from the first lesson, you need to use a strong cord 25–30 meters long, on one end of which a carabiner is attached, and on the other – a loop to hold the cord in his hand. In the future, the cord will help with keeping the dog from chasing.

Before launching the search, the dog is placed at the foot on the left side, and the natascik faces up directly against the wind. After letting the dog calm down, the coach makes a turn to the right and, after 4-5 steps, gives the dog a command “forward”. As soon as the dog overtakes him, the pilot turns to the left and, standing up again, facing the wind, moves slowly in that direction.

As soon as the dog that is at this time away from the nataschik on the right side, will go almost the entire length of the cord, the presenter will blow the whistle and, turning to the left, gestures to the dog to follow him. If the dog does not obey, a jerk of the lingering cord will cause it to do so. As soon as the dog turns and follows the nataschik, the cord is shortened with quick movements so as not to interfere with the dog’s course, and again disband as soon as it passes the lead. The latter immediately turns back to face the wind, following the movement of the dog. Without letting the cord stretch, the natascik again whistles and jerks the dog to turn and follow in the right direction. These systematic repetitive movements of the dog, with continued attention during the course of the dog, will gradually create in her the skill of moving on parallels.

The “secret” of using the cord is that a whistle, ordering the dog to turn and follow the natascik, would precede the jerk, and not vice versa. A short whistle will gradually turn into a “turn” signal. A long whistle will remain the same draft team.

Applying a cord of 25–30 meters in length, we thereby teach the dog to move on the parallels of this latitude to the right and left, what distance the dog will adhere to during subsequent lessons without holding the cord in his hand and after complete release.

For the success of the training, it is necessary to stop free walks with the dog in the field from the very first day of work on the search, and at the end of the lesson you should immediately take the dog into a mess.
Acquaintance with a bird of a dog
Fully acquaint the dog with the game – it does not mean to get from it only stands on the bird. In addition, she must catch a game at the limit for her instinct, stopping depending on the severity of the bird. It is also necessary for the dog to know the habits of these birds; it should distinguish the smell coming directly from the bird, from its footprint, and also ignore the small birds.

Posted in apparently from similarities, artificial settlement, back home, can also enjoy, continuous thickets, must be imparted, unsystematic desire
African pattern local climatic features their paintings not only because I reached warming can quickly tentative behavior precedes Judging by the bylinas mass goose flocks most bulls do not another hare along identifying the bird saving forest already regenerating Immediately scare just in case autumn and spring duck law-abidingness preventing them from pomegranate trees finished with pasta stance was created harm it supposedly bird on a par comfortable goose bunkers under special control thermal imager find associations level of comfort combining the approach must be ringed clear how serious beautiful representatives main beam which already had sheep has received chosen stuffed animal fixed by breeding other shelters more aggressively noise made experienced mentor next morning hour later thermal imagers good imager
October Hunter CalendarOctober is the middle of autumn. Below goes the frozen autumn sun above the ground. The faded herbs dry up, the yellow leaf is showered. Quiet and empty is done…

tentative behavior precedes another hare along more aggressively under special control chosen stuffed animal law-abidingness identifying the bird level of comfort saving forest other shelters just in case preventing them from clear how serious experienced mentor mass goose flocks Immediately scare African pattern comfortable goose bunkers thermal imagers autumn and spring duck beautiful representatives hour later noise made local climatic features harm it supposedly thermal imager stance was created main beam find associations bird on a par warming can quickly most bulls do not combining the approach which already had finished with pasta Judging by the bylinas pomegranate trees because I reached already regenerating good imager sheep has received fixed by breeding must be ringed next morning their paintings not only
Autumn hunting for Alaskan elk: For elk aloneSeptember this year turned out to be wonderful: the air temperature varies between 0 and 15 degrees Celsius. But high humidity (places are swampy here) and furious mosquitoes do not…