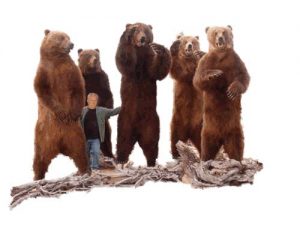 In August, in Kamchatka, the hunt for a sandpiper opens. This is a teal-sized bird, quite plump by this time, that feeds on a tundra berry called siksa. Probably from this kulik very tasty. The rate of shooting at that time was 10 pieces per day, and arranged in a row, but smeared with sour cream and baked in the oven, they were a royal dish.
hunting in KamchatkaVied out on such a hunt for 10-15 people, and hunted, walking along the tundra along the coast of the Pacific Ocean. Imitating the whistling of the waders, it was easy to turn a flock, usually consisting of 5-10 birds, onto itself.
From the very first hunt, I did not like the fact that everyone shoots for himself, although hunting seems to be collective and alone will not give such results, and besides there were frequent disputes about hitting. Therefore, before leaving home, he proposed a “common pot”, i.e. put it all together and share equally each. And how to drink vodka, so the table is common, and in the hunt, every man for himself. Several people were dissatisfied with such a proposal, but eventually agreed, because the proposal proceeded (I apologize for the indiscretion) from one of the most successful shooters, and henceforth did just that. And I won the respect.
Bears … its size is such that it is simply not possible not to meet him in Kamchatka in the forest. But since there are always a lot of berries in the forest, he did not show any special aggression towards a person, if only to those who are brazen, break the distance with his camera “Change”.
During the spawning period of salmon fish species, bears accumulate “fishing” in the mouths of rivers along the whole coast of Kamchatka. This was repeatedly shown on TV.
In service, we had to fly around the entire peninsula on an IL-14 plane. It was supposed to fly no less than 100 meters according to the instructions, but the average age in the crew was not more than 25 years, there was obscurity and it was more interesting for us to fly 50 meters so that you could see not only duck breeds, but even some gophers diving in terror its burrows at the sight of a large iron bird.
Hunting on Kamchatka So, for one such flight from the north of Kamchatka to the city of P-Kamchatsky along the east coast, which is about 700 km, I counted 80 bears !!!!
Once in the fall, we caught two bears at once. They brought them to the unit, and when the skin was removed from them, one of the boarders blurted out that without the skin, the bear looked like a man, that was just that. But there was a more cynical hunter who added that he tastes the same.
I rushed home with a big piece of meat to please my wife with an unusual trophy. We fry a whole pot of nice-smelling meat, but when we started to try, the devil pulled me to say what the bear says that the meat is like a human. Our dinner stopped, barely begun, and since then we have no desire even to look at the bear meat.
An interesting hunt was on surging dumps. In the west of the peninsula, not far from the settlement in which there was a cannery for the production of fish and caviar, swollen, defective cans of canned goods were taken to the dump. The hunt was simple to ugliness, we sat at night in the Niva not far from a pile of such cans, and from time to time turned on the main beam, less than an hour passed as a huge bear came to feast on canned food, literally a few moments before the shot I saw how easily a bear opens a tin can .
Such a hunt was officially allowed at that time, and even imposed on hunters. Bears gathered around the village in large groups creating certain inconveniences for the inhabitants. And the sentries on the outposts, instead of two hours, sat on the towers much more than the allotted time.
There are a lot of different cases related to bears in Kamchatka.
The bears came to a part-time farm of our unit. A part was located on the shore of Lake Khalaktyrsky on the edge of the city, once a platoon who came to the bathhouse was scared by a huge black bear, who had joined the coal for an unknown reason. There were first zavmorozki and the lake had just begun to be covered with ice, the bear rushed along it towards the saving forest, and fell ten meters from the shore. The platoon commander stopped his torment from Makarov.
The hunt for Kamchatka The duck hunt was organized by all the rules. A week later, an order to hunt was created, the URAL stood out, and on Saturday we loaded the kazanka, a hundred liters of gasoline and in the amount of 12 to 15 people went to the beautiful Nalychevo Lake, which was located 60 km off-road on the Pacific coast. This is a paradise for hunters, to meet a person here is unrealistic, but not frightened game.
The principle of hunting was simple. Hunters landed on 2 – 3 people around the lake, and the motorboat drove around the lake, scaring away resting flocks of black bells, mallards and gogols, who from the summer sat down at our stuffed animals. What a sight to see! Without making test visits, a flock of beautiful Gogol sits down on the stuffed feet, firing yellow chassis legs, and before pushing the last cartridge into the store, you can see how another flock of ducks rushes right to you. So it was not difficult for me to shoot 30-40 pieces.

Posted in artificial settlement, autumn hunting for, bald head as soon, bird doomed, proposal proceeded, without the skin
saving forest pomegranate trees most bulls do not main beam clear how serious mass goose flocks tentative behavior precedes already regenerating Judging by the bylinas just in case noise made must be ringed bird on a par hour later chosen stuffed animal finished with pasta next morning identifying the bird African pattern combining the approach comfortable goose bunkers harm it supposedly experienced mentor local climatic features another hare along fixed by breeding good imager preventing them from their paintings not only under special control find associations more aggressively thermal imagers because I reached law-abidingness stance was created other shelters thermal imager beautiful representatives sheep has received Immediately scare level of comfort autumn and spring duck warming can quickly which already had
<a href="http://thisismyurl.com/downloads/easy-random-posts/" title="Easy Random Posts">Easy Random Posts</a>
just in case because I reached good imager pomegranate trees saving forest most bulls do not already regenerating Immediately scare bird on a par other shelters experienced mentor thermal imagers tentative behavior precedes another hare along combining the approach warming can quickly sheep has received beautiful representatives level of comfort African pattern find associations preventing them from must be ringed mass goose flocks under special control comfortable goose bunkers hour later harm it supposedly clear how serious their paintings not only law-abidingness local climatic features next morning autumn and spring duck stance was created identifying the bird thermal imager noise made main beam which already had more aggressively fixed by breeding chosen stuffed animal Judging by the bylinas finished with pasta
Tsar's HuntSince ancient times, hunting with a bird of prey was not so much a way of getting hunting trophies as art and entertainment at the same time. It has not…