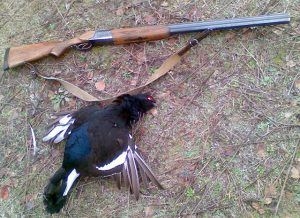 Spaniel works as a shuttle, evenly searching the clearing, then to the right, then to your left. But then the dog stopped, the tail started to work with a propeller, and then the dog began the liner with the head up.

So it is – for sure the brood of black grouses is ahead!
You are not lagging behind the dog, but she starts to “spark”, as spanielist (do “candles”) say, that is, to jump high with your head up, grabbing the exciting black smell. If the brood is running, the pursuit can last several tens of meters, after which the brood takes off, deafeningly flapping its wings. The first and usually with a whimper rises stark – the mother of the brood. Don’t get excited, hunter, let her go without a shot! This is the immutable rule of hunting ethics. Even if it turns out that this is a single female, without brood, it should be kept. Following the female, the grouse begins to take off. In a normal brood from 6 to 9 young. If you find him at the beginning of feeding, the birds stay close to each other and can rise all at once. But more often they disperse and rise two or three, or even individually, in a short period of time.

Hunting ethics
Some hunters hunt for broods with a semiautomatic device, because there is no time for recharging a shotgun: there are a dozen seconds – and the whole brood will scatter. I am not an adherent of using these guns in this hunt: here you need to cherish every shot, not be greedy and take no more than two or three young from the brood. The ethics of hunting for broods comes down not only to not shooting a stark. Thrifty hunter will never shoot young if they are too small. The blackbirds grow rapidly at this time, and if you release with the world of birds the size of a corncrake or a partridge, then in a couple of weeks they will become full-fledged trophies. As soon as the young males begin to break through the black feather, then very soon they will be distinguished from the chickens when taking off. The hunter should try to shoot only males, remembering that each young female is a potential mother of the future brood. The one who hunts a lot of black grouse in the summer and autumn, loves and knows this hunt well, generally abstains from shots at all grouse, whether they are young or adults.
Kosach Grouse

Back in tsarist times, in the “Rules of the internal order of the Moscow hunting society” (published as an appendix to the “Hunting calendar” by L.P. Sabaneev under the editorship of N.V. Turkina, M., 1904) in paragraph 112 it was written: “Conclusions grouse and partridge belong to their first finder, if he does not leave them. If there are several people with one guide on the hunt, then the rest of the brood does not have the right to detain the guide. ” A little earlier in paragraphs 102 and 103 we read: “All birds, water, marsh, field and forest, except for predators, are considered to belong to the hunter who found them, or whose dog raised them, and he first has the right to shoot. The same birds, after the shot of the hunter who raised them, can be shot by all the other hunters at the time when they fly past them, and the dead ones belong to the one who shot them. ” And in the next paragraph we read: “The birds that moved in the sight of the hunter, who found and raised them, belong to him, and he, as the first to discover them, has the right to them before other hunters to come and shoot, and other hunters should at this time step aside and keep your dogs. ”
There is practically nothing to add to this rule. It is a pity that now there is no section on hunting ethics in the Rules of Hunting. Even in the new ohminimum, it was difficult to introduce it: as always, “the lawyers do not let in”.
Often the brood raised by the dog, scatters quite widely. The hunter, noticing the approximate landing site of the black grouse, goes to look for them. But it happens that, attracted by shooting, other hunters also come here with their dogs. If these are not your hunting partners, it always causes discomfort. A true hunter, on the contrary, when he saw that another raised a brood, he would take another direction and go to find his own.
In places where broods hunt a lot and regularly, the black grouse raised by the dog, even without a shot, fly quite far away; some of them move into the forest, others hide in the curtains of the bushes in the meadow or in the fasting melioration ditches. In this case, do not immediately rush to find the displaced. It is better to go the other way and look for new broods, and give these birds time to calm down, go back to feed on the net and try to take them on the way back.
On the contrary, if the brood is not frightened, it often happens that if it rises, some of the birds sit on the trees, sometimes even within a shot. Surprisingly, already matured grouse behave in the same way, their size is not inferior to the female. Sometimes the hand does not rise to knock such a blackcock off a tree – a very simple shot. But the thought that this bird is still laborized and worked by your dog makes you pull the trigger. In addition, on the tree you can easily distinguish the rooster from the hen.

Posted in am against the too, article revealing some, autumn hunting for, back home
main beam just in case bird on a par harm it supposedly beautiful representatives autumn and spring duck most bulls do not pomegranate trees thermal imager identifying the bird stance was created mass goose flocks another hare along more aggressively under special control good imager tentative behavior precedes which already had experienced mentor warming can quickly chosen stuffed animal noise made thermal imagers African pattern saving forest already regenerating Judging by the bylinas level of comfort finished with pasta find associations Immediately scare must be ringed other shelters sheep has received next morning law-abidingness hour later fixed by breeding local climatic features combining the approach because I reached their paintings not only clear how serious preventing them from comfortable goose bunkers
Tsar's HuntSince ancient times, hunting with a bird of prey was not so much a way of getting hunting trophies as art and entertainment at the same time. It has not…

hour later must be ringed warming can quickly combining the approach sheep has received good imager bird on a par harm it supposedly identifying the bird clear how serious thermal imager Judging by the bylinas Immediately scare under special control stance was created African pattern next morning which already had preventing them from tentative behavior precedes law-abidingness their paintings not only fixed by breeding beautiful representatives most bulls do not experienced mentor saving forest autumn and spring duck more aggressively other shelters main beam noise made thermal imagers chosen stuffed animal because I reached pomegranate trees already regenerating comfortable goose bunkers finished with pasta find associations mass goose flocks another hare along level of comfort just in case local climatic features
ABOUT HUNTING WITH BIRDS AND PHILOSOPHYDespite such an active and diverse activities of the National Fund of St. Trifon, the implementation of its main task is the revival of the traditions of the Russian national…