ABOUT HUNTING WITH BIRDS AND PHILOSOPHY 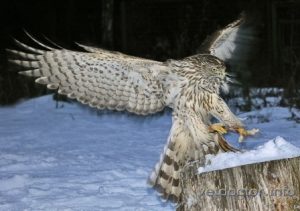 Despite such an active and diverse activities of the National Fund of St. Trifon, the implementation of its main task is the revival of the traditions of the Russian national hunting. “Every day, more and more admirers and lovers of hunting with birds of prey are turning to the Foundation both for hunting itself and in order to provide all possible assistance in all our endeavors, said Yevgenia G. Tkach, executive director of the National Foundation of St. Trifon. “After all, a trapping bird is the embodiment of the most courageous human notions about freedom, justice and beauty. Trapping birds do not have the instinct of submission to the leader, they only achieve common goals on an equal footing – this is exactly what a person aspires to in our time, this is what helps our Foundation to implement. ”

Far from nature, people in many countries consider the misuse of birds of prey in falconry. They naively believe that the matured bird turns into a “slave” of a falconer, “fulfills his whims” and is “exploited” by him. Practical work with feathered predators of different species convincingly shows that their cooperation with humans is the result of a mutual understanding of the benefits of such a community.

People themselves who are undoubted fans of comfort, for some reason, are denied such addiction by the so-called “wild animal.” A falcon, an eagle or a hawk is often perceived not as living beings of flesh and blood, but as abstract symbols of “freedom.” “Let the bird go free” will be required by the profane, not knowing that for the most part of the population of any feathered predator these days, “will” is equivalent to death. Watching plots about the release of birds confiscated from poachers into nature, sometimes the heart just bleeds – exhausted, with broken plumage, birds are doomed to inevitable death. Such unqualified help brings only harm.

Modern people, especially city dwellers, have a rather superficial idea about nature. Calling her the home of animals, they unwittingly compare their comfortable life with their constant struggle for the right to exist. Few people know how difficult it is for a winged hunter to survive in the modern world! Some statistics: about 1 out of ten goshawk experiences its first winter in nature (data for Europe).

The average lifespan of a Goshawk in nature is 3-5 years. For comparison, in the falconer, the same goshawk can live for decades, living in zoos to a quarter of a century (Moscow Zoo, etc.). What is the difference between the life of a bird in nature and near a person? First of all, the level of comfort.

In nature, any injury or fiddling disease worsens the ability of a predator to trap and can eventually lead to its death. In common with a man, even the long-term inability to hunt is not a problem. Deadly injuries in nature are quite easily healed at home, antibiotics are often overcome by completely deadly infections in nature …

Even without dwelling on such extremes, is it really difficult to understand what warmth in a freezing frost or water in the heat means for a falcon not less than for a person in a similar situation? As for the “bullying”, which supposedly exposes a person to a bird of prey when training it – well, in order to become better, sometimes you have to work a lot. Moreover, these loads are quite feasible, and a person carries them along with the bird on a par.

A hunting bird is a kind of professional athlete, and a falconer acts as a coach, and the very possibility of future successful hunts depends on their mutual understanding. Equally important is the physical condition of the feathered catcher. Even the most ardent opponents of falconry will not deny that any falconer is directly interested in maintaining the strength and health of his pets for as long as possible. Thus, the only disadvantage of falconry today is the removal of individual individuals from the cycle of reproduction of free populations.

Posted in autumn hunting for, birds are doomed, cold-blooded, naively believe, survive in the modern
identifying the bird local climatic features level of comfort fixed by breeding Immediately scare just in case finished with pasta main beam beautiful representatives comfortable goose bunkers thermal imager pomegranate trees good imager saving forest most bulls do not experienced mentor chosen stuffed animal law-abidingness other shelters another hare along already regenerating find associations Judging by the bylinas bird on a par their paintings not only sheep has received next morning warming can quickly thermal imagers African pattern harm it supposedly must be ringed combining the approach tentative behavior precedes under special control more aggressively stance was created autumn and spring duck because I reached which already had preventing them from noise made clear how serious mass goose flocks hour later
<a href="http://thisismyurl.com/downloads/easy-random-posts/" title="Easy Random Posts">Easy Random Posts</a>
find associations level of comfort more aggressively hour later main beam mass goose flocks identifying the bird good imager noise made because I reached Immediately scare pomegranate trees clear how serious saving forest sheep has received fixed by breeding African pattern must be ringed tentative behavior precedes combining the approach Judging by the bylinas comfortable goose bunkers under special control just in case other shelters warming can quickly thermal imager preventing them from autumn and spring duck bird on a par beautiful representatives local climatic features another hare along already regenerating chosen stuffed animal which already had harm it supposedly most bulls do not thermal imagers finished with pasta next morning experienced mentor their paintings not only law-abidingness stance was created
Popular hunting methodsWatching roe deer I want to immediately make a reservation, in my opinion, any stalking of the beast can be called amateur hunting rather than sports. A person who gives…