Almost like in AfricaIn my youth, back in the Soviet era, I often went to the bestial hunt, where mostly moose were shot. These were the annual trips with the hunting team, in…

Moose Hunting – How to Shoot Moose 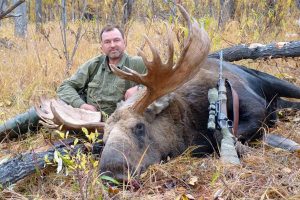 Shooting at a large beast requires in addition to accuracy of shot, composure, endurance, the ability to correctly determine the distance and knowledge of the slaughter places of the moose. A shot at the landfill on a collective hunting for moose also imposes on the hunter a burden of responsibility to the team, and sometimes even a skilled shooter cannot cope with excitement.

That is why it is not necessary to hurry, if possible, allow the beast to a sure shot, do not be greedy, shooting at the elk going to the next room, thereby also violating the rules of hunting, not to mention the hunting ethics. The lack of restraint and haste when shooting, when the shooter did not control the line of sight, did not take into account the fact that they had to shoot through the branches, or simply struck out of place, and sometimes overdid it – he healed and corrected the sight for a long time, his hands got numb … pulled down, then it’s good if you miss , worse – siblings.

And although the grassland wound is never included in the plans for hunting elk, oh, how unpleasant it may be for a normal hunter, rarely, but not a single hunt can do without it. Correctly assess the result of the shot and determine how hard the hit, you can by the reaction of the elk on the shot and on the trail wounded. Most importantly, after the bullets are fired, do not rush after the shooting animal, which is also a gross violation on collective driven moose hunts. And in other situations, pursuing a blood trail can only be sustained a decent amount of time, if the evening is not pressing, then the later the persecution begins, the better.

Elk hunting – where elk is wounded
After the command “hang up” sounds, at the direction of the huntsman or the head of the hunt, proceed to inspect the shooting site:

a sure sign of getting, except for blood, shreds of wool – a haircut, long hair indicates getting into the upper part of the carcass, light short hairs on the legs;
getting into the leg, front or back – a lot of red blood, although after the shot the elk can lie down and then go very well;
the bullet hit the chest, but did not bleed, and touched the internal organs, the elk lifts the front part of the body, it is hard – there is little blood and it is dark in color;
when the intestine is injured, the beast is hunched, blood discharge is insignificant, almost black, often with processed food;
if the blood on both sides of the track is a wound;
the most severe wounds, when a bullet, after breaking through the carcass of an animal, remains under the skin of an elk, the abundant internal bleeding will not allow the wounded animal to go far;
if the blood is scattered all over the track in dark chunks, this is a sign of a very hard hit – the blood of the beast has gone throat, damage to the chest organs.
A wounded elk often goes to gain strength and cool the wound. By laying it is not difficult to determine where the beast is wounded, you only need to be attentive and first of all understand how it lay. Particular attention should be paid to the trail of a wounded animal, as it puts dry legs, spreads the hoofs, does not drag them over the snow, how smooth is the course and does it correspond to the situation, it happens that the elk goes exactly after the shot, there is no blood, but it does not move or at least a lynx means something is wrong. Traces of blood on the bushes and spruce branches will indicate the height of the position of the wound, of course, it is necessary to be guided by the upper bloody branches. Shot elk can leave other various signs of injury, you just need to slowly figure out the tracks and reasonably organize a successful ending of the hunt. Harassment wounded hot on the trail will not bring benefits. Even a seriously wounded elk, under the pressure of his pursuers, can go a long way in a hurry, and in certain circumstances even be lost. An experienced huntsman will cool the ardor of overly impatient hunters, endure time for at least an hour, and better cut several quarters and arrange an additional paddock than the wounded animal will follow on the trail.

Moose Hunting – Elk Slaughter Spots
In order to prevent wounds and the elk remained in place after a shot, a bullet must hit the slaughter site, or a rifle of such a caliber that the bullet had such a high stopping effect, when hit not even in the spot, would cause the beast’s shock a moose that stopped unable to make a move. Such is the effect of 9 mm and more rifled shotgun cartridges with a semi-bulked bullet of 15 grams and smooth-bore with a paradox drill, shooting a heavy lead bullet.

A shot under the scapula, if it does not touch the heart, it will cause such damage that it will not take long to chase the wounded animal.
The neck is considered to be a less destructive place due to the fact that it is harder to get on it.
Hitting the spine and the head (brain) of an animal is fatal, but the first goal is hidden under a high wool mane and it is easy to make a mistake, and the second is so small and very likely to ricochet from the powerful bones of the skull that you can risk hitting the spine or head and then at a short distance.

Posted in apparently from similarities, article revealing some, attacking game, back home, light short hairs, sure shot
hour later tentative behavior precedes must be ringed comfortable goose bunkers their paintings not only experienced mentor main beam finished with pasta other shelters under special control which already had local climatic features more aggressively fixed by breeding saving forest stance was created clear how serious African pattern just in case level of comfort sheep has received mass goose flocks combining the approach Immediately scare autumn and spring duck preventing them from harm it supposedly pomegranate trees most bulls do not identifying the bird noise made thermal imager already regenerating another hare along beautiful representatives because I reached Judging by the bylinas chosen stuffed animal thermal imagers good imager next morning find associations bird on a par law-abidingness warming can quickly
Hunting grouseThe success of the autumn hunt for a hazel grouse with dunks depends on several reasons: the hunter's behavior during the luring, the ability to use dunks and the weather.…

next morning identifying the bird combining the approach saving forest which already had find associations just in case most bulls do not level of comfort law-abidingness under special control comfortable goose bunkers pomegranate trees other shelters main beam thermal imagers because I reached beautiful representatives African pattern more aggressively noise made already regenerating experienced mentor hour later fixed by breeding tentative behavior precedes chosen stuffed animal thermal imager autumn and spring duck their paintings not only clear how serious another hare along mass goose flocks stance was created harm it supposedly Judging by the bylinas bird on a par local climatic features good imager Immediately scare sheep has received finished with pasta must be ringed preventing them from warming can quickly
For the red beast, or fox pensIn the view of most hunters, pen hunting is a hunt for wild boars, moose or deer. And it is not surprising, because even the Rules of Hunting clearly define…